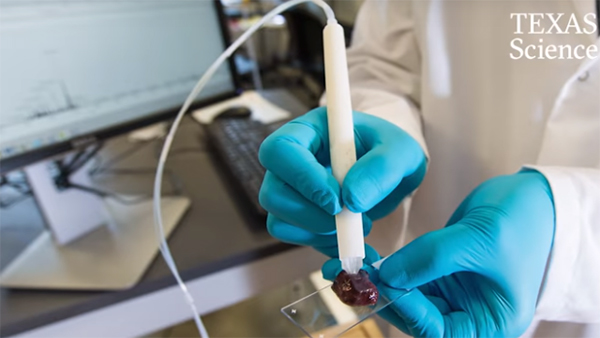 The word “cancer,” which covers 200 different types of disease, can sound like a death sentence. Although there is no magic cure for all, an early cancer diagnosis can save lives and improve survival rates. Now, a team of researchers at The University of Texas at Austin have developed a new surgical “pen” that can detect malignant tissue in just seconds, helping surgeons remove all of it the first time and reducing the chances that it’ll come back.

After analyzing human samples, the handheld instrument, “MasSpec Pen,” took about 10 seconds to provide a diagnosis and was more than 96 percent accurate. Moreover, the pen was able to spot cancer at the margin or edges where surgeons had cut, reducing the odds of recurrence or repeated surgeries.

Most cancer patients will express concern after surgery, and say, “I hope the surgeon got all cancer out,” according to Livia Schiavinato Eberlin, lead author of the study and an assistant professor of chemistry at UT Austin. She believes the pen could maximize cancer removal to improve patients’ treatment and survival.

“[O]ur technology could vastly improve the odds that surgeons really do remove every last trace of cancer during surgery,” said Eberlin, in a statement.

This can also prevent surgeons from removing too much healthy tissue, which can have negative consequences for patients. For example, breast cancer patients have a high risk of painful side effects and nerve damage from removing breast tissue. Meanwhile, thyroid cancer patients following surgery may be at risk for losing their speech ability or the ability to maintain calcium levels, which is essential for muscle and nerve function.

MasSpec Pen differs from Frozen Section Analysis, the current cancer detection method because it takes 10 seconds compared to 30 minutes or more to deliver a diagnosis when analyzing cancer and normal tissue during surgery. A longer duration means the patient is at higher risk for infection and the negative effects of anesthesia. With the pen, doctors hold it against the patient’s tissue as they trigger the automated analysis via a foot pedal, and wait 10 seconds for a result.

Throughout this process, the pen releases a drop of water onto the tissue, and small molecules travel into the water. The device sends the water sample into a mass spectrometer, which spots thousands of molecules as a molecular fingerprint, which is then instantly evaluated by software. Researchers were careful to keep the tissue intact during the process.

“When designing the MasSpec Pen, we made sure the tissue remains intact by coming into contact only with water and the plastic tip of the MasSpec Pen during the procedure,” said Jialing Zhang, a research associate at the Eberlin Lab at UT Austin who led the experimental work.

In the study, published in Science Translational Medicine, Eberlin and her colleagues gathered over 250 human tissue samples that included both normal and cancerous tissues of the breast, lung, thyroid, and ovary. Upon analysis, the words “Normal” or “Cancer” will automatically appear on the computer screen, while for cancers like lung cancer, the name of a subtype may appear. As previously mentioned, the device was more than 96 percent accurate for cancer diagnosis compared to the current method, which can lead to unreliable results in 10 to 20 percent of cases.

There are similar technologies, such as iKnife, that are making their way to the operating room. iKnife is able to accurately differentiate cancer and normal breast tissues in real time. It works in conjunction with the mass spectrometer to sample the smoke that rises when surgeons heat tissue as they cut. The researchers have found it has a high overall accuracy of 95.6 percent and could potentially prevent the repeated surgeries that 20 to 30 percent of patients undergo.

The innovation of new diagnostic tools in the operating room could help lower recurrence rates and prevent repeated surgeries for all cancer patients.