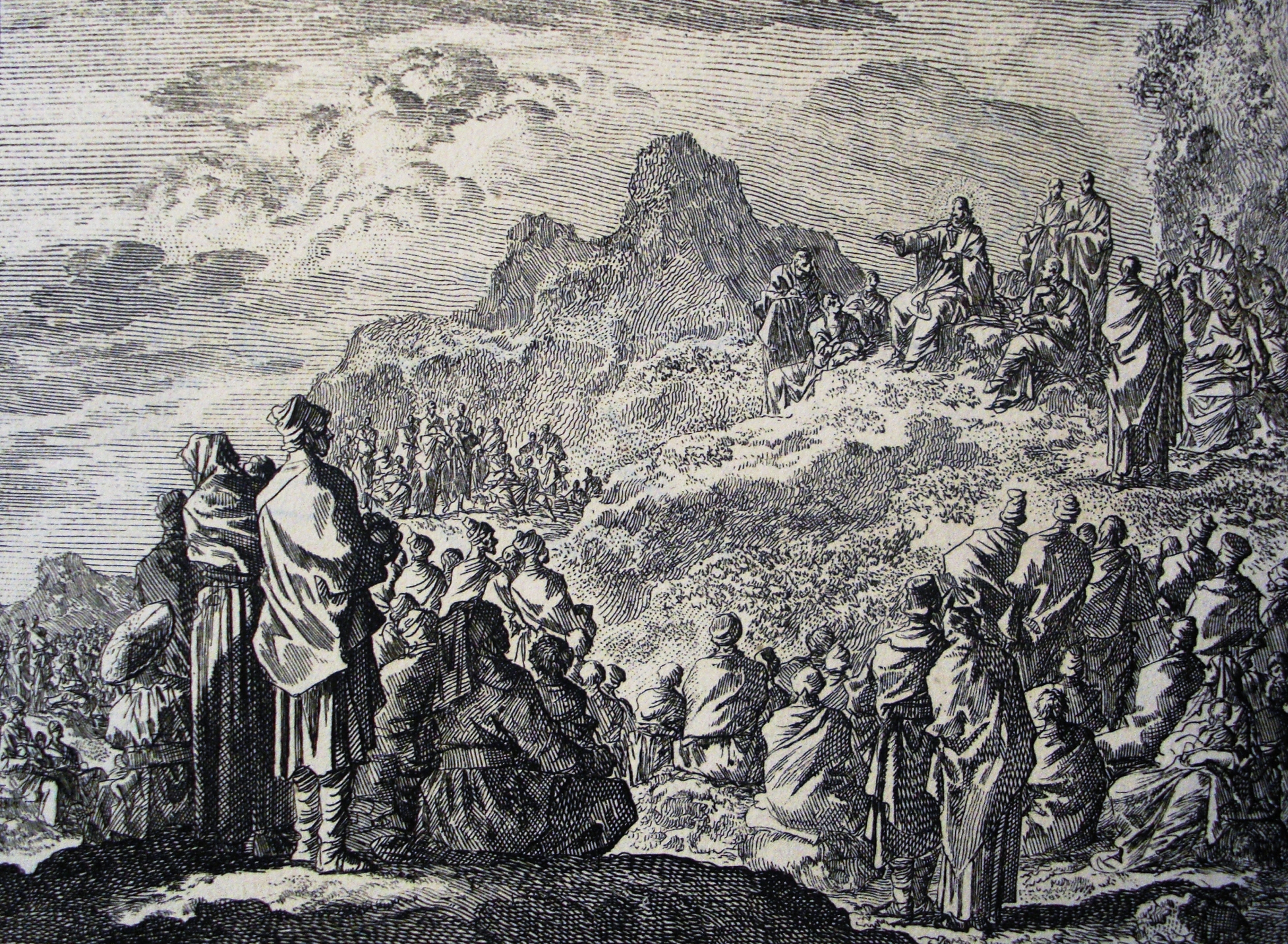 [Mt 5:3] “Blessed are the poor in spirit, for theirs is the Kingdom of heaven.

Jesus Comforts the Poor  So the first blessing is “blessed are the poor in spirit.”  He is talking about the poor.  In Matthew, it says “the poor in spirit” but in Luke 6:20, the word “spirit” is not included.  And it says, blessed are you who are poor, for yours is the Kingdom of God.  So he starts off by comforting the poor.  So it starts with the way that God comforts the poor and gives courage to the poor.  So who must be the owners of the new world?  He is teaching us that in the new world, those who have prosperity and pleasure right now do not have the priority, because the priority of the new world is for the people who are repressed and so poor and sad right now.  Jesus is saying, those of you who are weak and poor right now, do not be sad because the Kingdom of God is yours.

God Comforts the Poor  In the Bible there are many places where God comforts the poor very warmly.

[Ps 9:18] But the needy will not always be forgotten, nor the hope of the afflicted ever perish.

[Ps 35:10] My whole being will exclaim, “Who is like you, O Lord?  You rescue the poor from those too strong for them, the poor and needy from those who rob them.”

[Ps 140:12] I know that the Lord secures justice for the poor and upholds the cause of the needy.

Here it records the way God remembers the poor and saves the poor.  So we are able to see the love of God, the way He comes to the one who is poor, abandoned, and in pain in this world.  So God is coming saying, do not be sad just because you are poor and abandoned.  But this does not mean that all wealthy people are bad.

Humility  Matthew recorded that the poor in spirit are blessed.  What does the poor in spirit mean?  This means blessed are the poor in heart.  Those who have humble hearts.  Jesus used Aramaic language, this is a little different from the Hebrew language.  In Aramaic, the word “poor” used in plural form is “modesty.”  So here he is talking about spiritual humility, spiritual modesty, the modesty of the heart.  He is talking about the poor in heart, the ones who lower themselves, the ones with a humble heart, they are blessed.  This humble heart is the heart of Jesus.

[Mt 11:29] Take my yoke upon you and learn from me, for I am gentle and humble in heart, and you will find rest for your souls.

[Am 8:11] “The days are coming,” declares the Sovereign Lord, “when I will send a famine through the land- not a famine of food or a thirst for water, but a famine of hearing the words of the Lord.

Spiritual Thirst  He is saying, there will be a famine, but not for food or water, but for the Word.  We have this hunger for the Word.  A spiritual thirstiness.  He is telling us that the ones who are hungry and thirsty for the truth are blessed.  If you look, the humble ones are truly thirsty for the truth.  The opposite of being poor is being filled.  A poor person is hungry, and a rich person is filled up.  If you are already filled up, then you do not seek.  So Jesus is telling us that those who are hungry and thirsty, poor like this and spiritually for the truth, they will receive the Kingdom of heaven.  So being humble is very important.

[Php 2:5-8]
5. Your attitude should be the same as that of Christ Jesus:
6. Who, being in very nature God, did not consider equality with God something to be grasped,
7. but made himself nothing, taking the very nature of a servant, being made in human likeness.
8. And being found in appearance as a man, he humbled himself and became obedient to death? even death on a cross!

[Php 2:9-11]
9. Therefore God exalted him to the highest place and gave him the name that is above every name,
10. that at the name of Jesus every knee should bow, in heaven and on earth and under the earth,
11. and every tongue confess that Jesus Christ is Lord, to the glory of God the Father.

So how was Jesus? Jesus was the one who lowered himself, and by so doing, he was exalted.  So Jesus is teaching these words to the disciples, but not only did he say it, but he really lived like this.  So he perfectly showed them the way of heaven.  So how are the hearts of the people of the Kingdom of God?  The heart should not be arrogant lifting itself up, but be humble lowering itself.  That is the heart of the person of the Kingdom of God.  This heart and this attitude of humility and modesty is the basis and foundation for becoming a person of heaven.

Paradoxical Wisdom  But these words, that we should lower ourselves, are very unfamiliar to us.  The truth of the Word of God is a paradox.  We say, “why do we have to lower ourselves, to die?”  Satan tells us, “why do you have to lower yourself?”  He says, “why should you live that way?”  These words are unfamiliar to us, that is why it is unfamiliar.  When the paradox of the truth is given to children, they say it is a lie.

Foolish Wisdom  If you go to countries that are wealthy and have a lot of knowledge and wealth, they will say this is foolish.  Apostle Paul went to a city named Corinth, a place full of wealth.  A very clever land.  Apostle Paul went there proclaiming the Gospel.  And then the smart people there said, this is all foolish.  Then Apostle Paul replied, yes it is foolish, it is foolish wisdom.  But no matter how wise men are, the wisdom of men is still lower than the foolishness of God.

According to the wise people of this world, the Gospel may be foolish.  But it is true wisdom.  In the opposite way, looking through the eyes of the Gospel, the wisdom of this world is foolish.

Losing God  Because in this world, no matter how much wealth and material possessions you have, but if you lose God’s Word, then you will live a foolish life.  When man loses God, man will become nervous and lonely, and there will be pain.

God Revealed in Christ  How is God revealed by Jesus Christ?  God revealed himself through Jesus Christ by the way he lowered and emptied himself.  Jesus being crucified on the cross is not strong, that is very weak.  But in that weakness, a very amazing strength is brought out.  What is the strength?  That strength is love.  It is not outward strength, but the strength of love.  We sometimes want to be rich and strong.  But if we truly want to be strong, we must first be poor and weak.  This is opposite, but through this, a new and amazing world of peace will open up.

Peace through Christ  When we try to become weak, so many people could laugh at us, Satan could laugh at us, but when we have this kind of heart then we could find true peace inside of us.  There is something in Christ when we find him inside our hearts, we begin to feel peaceful inside.  These words seem so unfamiliar to this world that desires and longs for power and strength.  But these words teach us to have peace in our hearts.  So in those places where all people try to live by the Word of God, there is peace.  The Word of Jesus Christ is the Gospel, in that place, there is true peace, there is no fighting.  We tend to fight when we try to win.  But in those places where everyone tries to lower themselves, there is peace.  So I wish that we will be able to get rid of the arrogance inside of us and have the humble heart of Christ.

Become Poor in Spirit  In the days of Jesus, all the arrogant people weren’t able to meet Jesus.  Instead, the poor people, the sinners, because they at least had troubled hearts, they were able to meet Jesus.  In this message of the Sermon on the Mount, everything sounds like a paradox.  But I wish that these words would not be unfamiliar, but be familiar to us.  The first teachings were about modesty and humility.  So all the other messages afterward were connected to this message.  So I wish that you would become the poor people of the Kingdom of God.