Finally, A Test That Reveals If You Really Need To Give Up Gluten 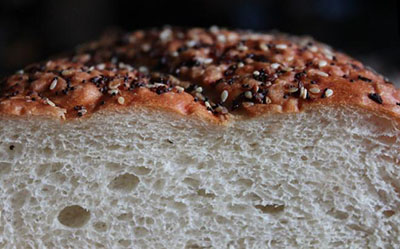 Celiac disease is the reason why so many people can’t eat bread. The disease is really an autoimmune disorder, meaning every time a patient consumes gluten ? a common protein found in wheat, rye, and barley ? their immune system attacks the lining of the small intestine; painful digestive problems ensue. But across the country, roughly 3 million Americans claim to have a similar insensitivity without a proper diagnosis. So, a team of researchers from Columbia University Medical Center (CUMC) decided to find out why.

While people diagnosed with celiac disease suffered extensive intestinal damage due to their gluten slip-ups, researchers found there was no spike in their blood markers to reflect their immune system was highly active. But the NCWS group did have the blood marker that indicated damage was done to their intestines. Researchers believe they can use this to identify those with a gluten or wheat allergy, which they were otherwise unable to discern from one patient to the next.

“In the future, we may be able to use a combination of biomarkers to identify patients with non-celiac wheat sensitivity and to monitor their response to treatment.” said the study’s lead author Armin Alaedini, assistant professor of medicine at CUMC, in a statement.

After six months of following a strict diet bereft of any wheat or gluten cereal for six months, participants were able to normalize their immune system markers. Patients reported improvements in digestive and non-digestive symptoms. In recent years, there has been a significant rise in the number of people who believe they are gluten sensitive because of digestive issues. According to advocacy group Beyond Celiac, nearly six times as many people report having sensitivity to gluten than there are people diagnosed with celiac disease.

“Our study shows that the symptoms reported by individuals with this condition are not imagined, as some people have suggested,” said the study’s co-author Dr. Peter H. Green, the professor of medicine at CUMC and director of the Celiac Disease Center, in a statement. “It demonstrates that there is a biological basis for these symptoms in a significant number of these patients.”

Those with this extreme wheat allergy may be suffering in silence because their condition is undiagnosed. However, people with celiac disease and gluten or wheat sensitivity should not be mistaken for the 30 percent of consumers who choose to buy gluten-free products and the 41 percent of U.S. adults who believe gluten-free foods are beneficial for everyone. In reality, many of those gluten-free niche foods are low in nutrients and higher in sugars, sodium, and fat compared to products that contain gluten. Because of this medically-inspired diet fad, researchers say it’s important to diagnose those who do suffer from severe reactions to gluten but don’t have the biomarker to prove it.

“These results shift the paradigm in our recognition and understanding of non-celiac wheat sensitivity, and will likely have important implications for diagnosis and treatment,” the study’s co-author Dr. Umberto Volta, a professor of internal medicine at the University of Bologna who collaborated with CUMC, said in a statement. “Considering the large number of people affected by the condition and its significant negative health impact on patients, this is an important area of research that deserves much more attention and funding.