Being A Couch Potato Could Cost You Your Life 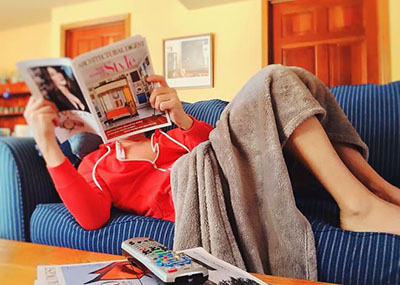 Physical activity keeps you lean, toned, and strong, but can it also determine a longer life? A study nearly half a century in the making has given us the best reason yet to exercise? researchers found a definitive link between low aerobic capacity and an increased risk of dying early.

Researchers studied the impact a person’s ability to take in oxygen during heavy exercise, known as VO2 max, could have on their risk of death. After 45 years of tracking a group of men’s health, they found that men with low aerobic capacity levels were 21 percent more likely to die over the course of the study. They also discovered the risk of death associated with low aerobic capacity was second only to smoking? greater than high blood pressure and high cholesterol.

For the study, begun in 1967 and published in the European Journal of Preventive Cardiology, researchers from Academy at the University of Gothenburg in Sweden tested nearly 800 men’s VO2 max levels; the higher the VO2 max, the more physically fit they are. Physical activity delivers oxygen and nutrients to your tissues to help your heart work more efficiently.

“The benefits of being physically active over a lifetime are clear,” said the study’s lead author Dr. Per Ladenvall, a researcher in the department of molecular and clinical medicine academy at the University of Gothenburg, in a statement.

Ladenvall and his team followed the men from up until 2012. Throughout the 45 years, they checked up on their health by conducting several physical examinations once every 10 years and kept track of the details from any cause of death from the National Cause of Death Registry.

“ The risk associated with low aerobic capacity was evident throughout more than four decades and suggests that being physically active can have a big impact over a lifetime,” Ladenvall said. “We have come a long way in reducing smoking. The next major challenge is to keep us physically active and also to reduce physical inactivity, such as prolonged sitting.”

Aside from increasing your chances of living a longer, healthier life, being physically active can also improve the quality by reducing the risk of illness and increasing your chances of happiness. According to the Centers for Disease Control and Prevention (CDC), regular and consistent physical activity is one of the most important commitments you can make to your health: It helps to control weight; reduce risk of cardiovascular disease, type 2 diabetes, and certain cancers; strengthen your bones; improve your mental health and mood; improve your ability to participate in activities; and lowers the risk of dangerous falls.

The CDC recommends 150 minutes of moderate exercise or 75 minutes of intense physical activity a week in combination with at least two days of strength training each week. According to Lisa Cadmus-Bertram, an assistant professor of kinesiology at the University of Wisconsin at Madison, “If everyone did that, we’d be much more fit and healthy.”

Simple things like grocery shopping and household chores can become difficult for the out-of-shape, which is why regular physical activity is key to improving your muscle strength and boosting your endurance.